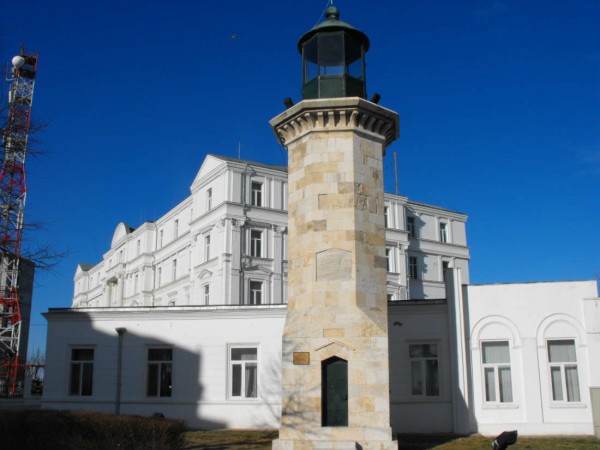 The Genovese Lighthouse is a monument that can be easily unnoticed, but the beauty and importance to the history of Constanta are undeniable. The Genovese Lighthouse is located on the seafront, between the Casino and the former Carol Hotel (today the Navy Headquartesr).
Despite its name, the monument has nothing in common with the Genoese. In an article on the history of Genoese Lighthouse, published in 2004 in a local newspaper journalist Maria Comanita Cica, notis that: "The Genoese arrived in Constanta port but they have no lighthouse built here. Their reputation as  rulers of the sea went throughout history and construction of this lighthouse has been attributed as it entrenched the idea that everything is better in Eastern ports. " In the same article Peter Covacef writer who quoted in his "Genoese Lighthouse Story", says that "rather Genovese name comes from a qualifier that was granted by the Turks who occupied Dobrogea until 1878. Turks who were then in these places, modest people people and modest residential structures remaining from them impressed by the large buildings found in Constanta starting XV century [...].

Impressed by thick walls found in several places in Constanta they called in their language, Geneviz path (Genoese fortress). In Constanta there were several buildings that have held the name of Genovese key, Genoa deposits could not be built as a lighthouse to not be called the Genoese Lighthouse. "
Throughout the history of the same establishment have worked also two more lightshouses. The last one was rebuilt between 1858 and 1860 by a French engineer of Armenian origin who arrived in Constanta after the end of the Crimean War. Thus was born the beautiful Genoese Lighthouse!
The monument has a height of 16 meters, octagonal shape and is built of natural stone blocks, carved on all sides and joined together with mortar made of lime and sand mixed with sea shells. Lighthouse continues with a metal dome with eight windows from which light was projected. The top of the dome is decorated with elements indicating the cardinal points. Inside there is a spiral staircase with 53 steps, which leads to the metal dome. The Octagonal lighthouse is one that gives a touch of uniqueness, causing it to be an orginal building.
The Lighthouse guided mariners with its white light which rises to 21 meters above the sea and had a vision about 5 kilometers wide.
Unlike the other buildings of the same type, the light from the lighthouse lies not rotated. Establishment functioned until 1905, when it was replaced by a modern lighthouse, becoming at that time one of the most popular and picturesque monuments of the city of Constanta.