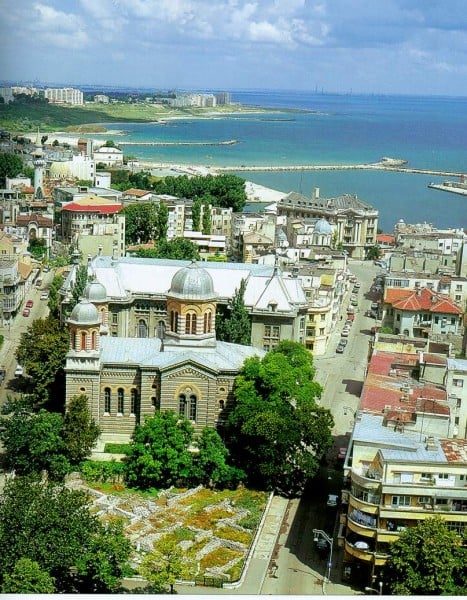 The cathedral is dedicated to Saints Peter and Paul and it is the largest and most important Orthodox church in Dobrogea, being known as the Cathedral of the Archbishop of Tomis. The church is situated in the historical area ofthe city, close to the seafront boulevard Elizabeth and the Casino.
Built between 1883 and 1885 was the first Orthodox settlement built in Dobrogea after the realease from Ottoman domination. The church was built of brick and concrete, after the plans of the famous architect Ioan Mincu. The Interior furniture, consisting of veil, pews, chandeliers and candlesticks is genuine and was executed in Paris, from oak, according to architect's drawings. Part of the furniture, with an extraordinary elegance, is covered with gold leaf and inlaid with semiprecious stones.

In terms of interior original painting, Saints Peter and Paul Cathedral has an interesting story. Work on the painting of the church was started in 1888, three years after completion of construction. The task was given to Demetrescu Mirea, a famous painter of the time.
The painter mastery changed not only the appearance of the shrine, but also its history. Instead of traditional Byzantine painting, Mirea, a painter with innovative vision, preferred realistic style, assigning them personalities faces of saints in everyday life of Constanta. This has triggered a scandal. The Orthodox Church were shocked by the artwork. They refused to hold the consecration of the cathedral and requested emergency change of the painting.
After nearly a decade in which the church did not work, the Ministry of Cults approved the consecration of the shrine in 1895 with all existing paintings. Currently there are no controversial painting as Saints Peter and Paul Cathedral was destroyed during the Second World War. The church was rebuilt in 1951 and consecrated again. New painting was done in fresco technique by Gheorghe Popescu and Dona Niculina Delavrancea.
The painting, done in Byzantine style with romanian decorations, has a great beauty and offers the cathedral the monument of art status, besides the architectural monument. Note frescoes are the two "thrones" at the entrance to the Cathedral and in detail depicting Heaven and Hell.
Saints Peter and Paul Cathedral Heritage includes ancient icons, including a miraculous icon of the Virgin Mary, gospel, epitaphs, religious objects made of precious materials, and the relics of three saints.
In December 2001, the Cathedral of Saints Peter and Paul church was declared archbishop monastic character. Since then, the services are celebrated twice a day, morning and evening, by the monks who live in the Archbishop's Palace located near the cathedral.