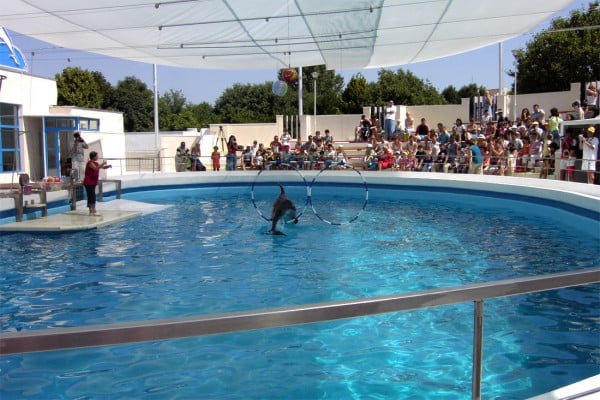 The Dolphinarium is among the most visited tourist attractions in Constanta both in summer and in the off-season. Along The Planetarium and The Astronomical Observatory and the Microreserve, the Dolphinarium is a beautiful and exciting part of the Natural Sciences Museum Complex of  Constanta, located on Mamaia Boulevard at the intersection with Soveja street.

The Dolphinarium was inaugurated on June 1st, 1972, representing at that time the first museum of its kind in Romania and South-Eastern Europe. Currently The Dolphinarium remains the only location in our country where you can relax watching a great show whose protagonists are the dolphins, the sea lions and penguins. The dolphin stars are Peipei, Chen Cheng and Ni-Ni (one male and two females), three dolphins brought from China in 2010. Finned stars perform  glamorous tricks every day after a well-established program, snatching smiles and wild applause from the present spectators.

Visits at The Dolphinarium should not be delayed! You'll live a beautiful experience, in a universe full of joy and smiles!

The entrance feeis 25 Lei Lei for adults and 12 lei for students. The children aged under 5 years enjoy FREE access.