The Aquarium is located on the seafront, right in front of the imposing Casino. Opened with great fanfare on 1st of May 1958, Constanta's Aquarium was for a long time the first and only public institution of its kind in our country. The building that hosts the aquarium was built in the early twentieth century as an annex to the Casino and functioned as a restaurant, and destinatined to its current redevelopment. The Aquarium exhibition spaces are intended to describe the permanent exhibition of aquatic fauna and flora, and some temporary exhibitions on various topics related to biology, ecology, aquatic and marine fisheries.

Along time The Aquarium gathered over 100 species of fish and marine creatures belonging to different geographical areas. Taking into account the environmental criteria and biogeographic taxonomic the Aquarium is divided into three sections: Marina, freshwater and exotic fish. The Marina section is the largest and most representative part of the aquarium and contains species of fish and invertebrates found in the Black Sea and also som of the Mediterranean migrants. 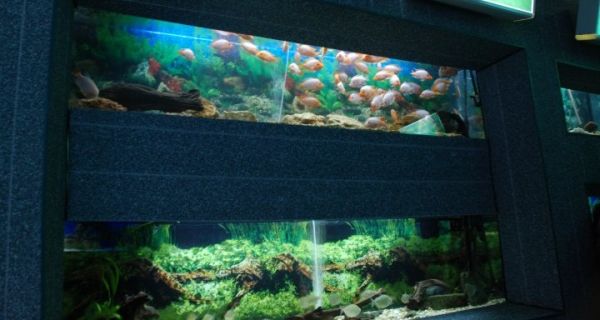 The most spectacular in this section is the basin which hosts an impressive collection of sturgeon specimens known for their longevity. The point Interest to visitors who visit the Aquarium Constanta are the species of big cat, the big dragon, the sea stars, high sea horse, and many other species.

Freshwater Section shows fish and freshwater invertebrates that inhabit ponds and lakes and coastal romanian waters of the Danube Delta: carp, crucian, carp, rudd, roach, bream, are presented as predatory catfish, pike and perch. The exotic fish section is a true delight for Aquarium visitors. In its swimming pools varieties of freshwater fish belonging to different ecosystems and tropical and subtropical areas: varieties of piranhas, knife fish, angel fish, spade fish, cat fish and many other types of fish.

Access to the Aquarium can be made fo 20 lei for adults and  10 lei for students, children up to 5 years enjoy free of charge access.