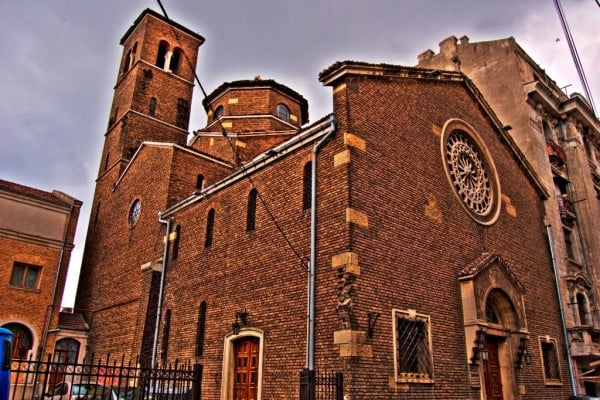 The Roman-Catholic Church "St. Anthony of Padova" is situated in the historical area of Constanta, close to Carol I Mosque and Cathedral of Saints Peter and Paul. The imposing church was built between 1935-1936 on the site of a former Roman Catholic chapels. The construction drawings were prepared by Roman architect Simon of Bucharest, who set as model the churches in northern Italy. The building, which dominates the landscape of the old city today, is built of red bricks and the architectural point of view it is included in current novels.
The Romanesque style building is distinguished primarily by its massiveness and simplicity of the exterior and interior lines. Another specific feature is the presence of Romanesque churches concave domes. This small windows and decorative rosette or gable type are the striking features of churches built in the Romanesque style. These general features are found in St. Anthony of Padova Church.
Throughout its history, the Roman Catholic Church in Constanta had episodes less happy. Some of this include taking the church by Soviet troops during World War II. The Russian vommanders found the church tower very suitable for monitoring the harbor area, so they turned the place of worship in the warehouse for ammunition.
Another dramatic period in the history of St. Anthony Church was faithful communist era when they were forbidden to hold services. However, imposing place of worship has resisted all attempts, remaining one of the most beautiful and interesting buildings in the city of Constanta.
An important moment in the Church's feast of St. Anthony, also known as "lily festival" celebrated every year on June 13. Anytime is a good time to visit the church to meet some Catholic customs.