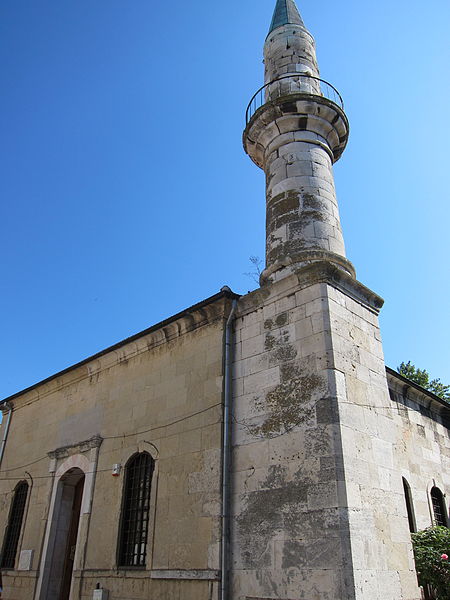 The Hunchiar Mosque is situated in the historic area of the city, a few steps from the Museum of Traditional Art. This place is not tvery large but has a huge significance for the history and multiculturalism of Constanta being the oldest Muslim religious edifice in the city.
The history documents tell us that at the beginning of the nineteenth century, Constanta, then occupied only the peninsula (now the historic area, almost to the Casino ), was bounded by a defensive wall with bastion built by Turks who ruled Dobrogea at that time. The defensive wall was destroyed between 1828 - 1829, leaving only a pile of white stones. Of those remainings Hunchiar mosque  was built in 1867, whose name in Turkish means "government."
Having a specific moorish architecture the Hunchiar mosque is a simple structure consisting of a main body of the square, which houses a prayer hall and a 24-meter high minaret, fitted at the top with a patio. From the minaret, which is equivalent to the Christian churches bell, is the call to prayer. In the past, the imam, the muslim priest, up to 5 times a day goes on top of the minaret to announce the believers, in Arabic dialect, it's time to pray. Even today you can hear the call of the imam, speaking in Arabic,from  the Hunchiar mosque's minaret. The only difference is that the imam not climb the minaret porch, but the speaker is used to spread the call to prayer.

During the Second World War the  Hunchiar mosque was seriously damaged, which led to its closure. The church remained in this state until 1990 when representatives of the Muslim religion were renovating it. Can still be seen pieces of white stone that make up the defense wall of Constanta.
Inside, the mosque a a simple room can be found, square shapeed where believers pray. The floor is covered totally with a beautiful Persian rug and wall paintings are devoid of religious scenes to play. The only items that beautifies the mosque walls are several paintings that are written with Arabic letters verses from the holy book, the Koran. The main element of worship inside the mosque is the mihrab, the place where Imam holds the religious ceremonies. This altar, if we can call it so, is a "niche" in the wall and is dressed in a special tile, brought from Turkey and inscribed with verses from the Koran. Mihrab is placed before a red Persian carpet, handmade, given in 2001 by the President of Turkey. Bear in mind that always faces the mihrab of the Muslim holy city, Mecca. The mihrab is right to Minbar, the place where the imam preaches on Fridays and holidays. Minbar is the way of Allah and appears as a wooden balcony with steps. Number of stairs is always odd and vary depending on size church.
If you walk for the first time a window is good to know that it requires some rules of conduct such as decent outfit and keeping peace. Also know that anyone entering a Muslim place of worship or to pray or to visit him and regardless of faith, must remove their shoes. This rule is imposed for reasons of hygiene, because during prayer, the faithful Muslims forehead touching the floor. If your visit overlaps prayer time, it is better to avoid passing in fromt of a believer who prays.