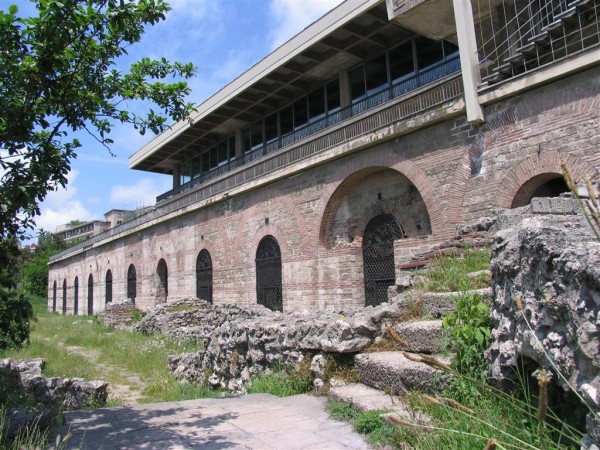 The Roman Mosaic Edifice is located near the Museum of National History and Archaeology and was discovered in 1959 during some civil works undertaken in the Ovidiu Square. Further research discovered that the monument was built in the fourth century and gradually spread until around the sixth century, when it stopped. In its glory times the edifice represent the largest building of its kind in the whole Roman Empire and serve as a link between the port and the ancient city, the place where the conduct its trade and storage of goods. Originally, the building spans three of the four terraces of Tomis harbor waterfront. The first terrace was located at the current Ovidiu Square and connects with one of the ancient city's public markets. Some huts and impressive hall with mosaic pavement kept occupied the next terrace of the building. The mosaic hall represent actual place of meeting of the merchants and officials of that time. Last terrace was situated in the ancient harbor quays and warehouses still contains a series of vaulted limestone covered today. The building was equipped with a rainwater drainage system, yet functional. With the fallen of Tomis fortress in the sixth century, the building has not been maintained and degraded. However, being made of material of good quality mosaic the floor has been preserved very well. Currently, from the total area of 2000 square meters of mosaic pavement is preserved only a portion of about 850 square meters. The room's floor is a unique beauty and consists of two distinct parts: a frame that surrounds and includes room and vegetal and geometric mosaic itself, made up of pebbles of different colors: white, red, black, green, yellow.
The museum exhibition provides collections of goods found in stores building: anchors, bars, weights, paints and resins amphorae, statues, earthen lamps collections, marble, polychrome mosaic pillar heads.