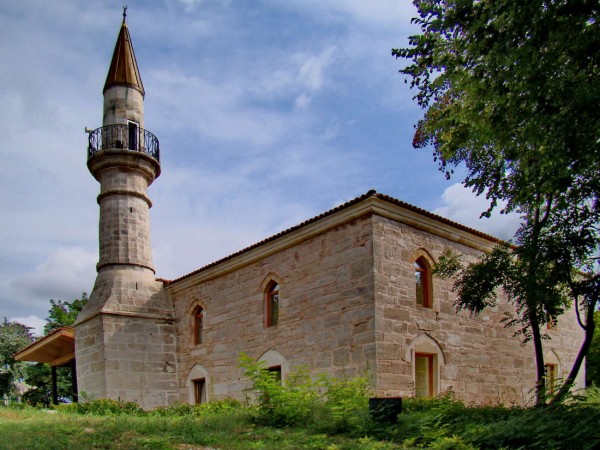 The Esmahan Sultan Mosque from Mangaliais one of the most important historical and religious monuments of southern romanian seaside. The muslim place of worship was built in 1573 by the daughter of one of the greatest rulers of the Ottoman Empire, Selim II, in memory of his father.
The mosque is built of cut stone, recovered from the Callatis ruins, and was executed by a team of turkish craftsmen. A feature of the building is that the stone blocks were joined together without using any binder, but only with cast steel staples placed in holes made in stone. Ta the entrance of the  Esmahan Sultan Mosque oak props are fitted. On the wall opposite the mosque entrance (another name used for places of Muslim worship) is found Minbar (pulpit), a place of prayer arranged as a balcony with steps from where the imam, the muslim priest preaches on and eaxh on feast days. On the left Minbar the mihrab or the blind window is located and a Mecca oriented niche. It is a kind of shrine where the  Imam is officiating religious service every day. The interior lacks of cult murals and other decorative items. The ceiling is decorated with wood work full of beauty and artistic craftsmanship which draws the attention of all visitors. It should be noted that prayer spaces for women are separated from the rest of the room by low wooden railing. Through a spiral staircases the terrace at the top of the minaret (point of which, in the past, the Imam made the call to prayer) can be reached. On the outside, the building takes on a particularly due to the porch pillars and wooden railings. Inside the worship place a fountain made of stone from a ancient tomb can be found. Also, the mosque is surrounded by a cemetery as valuable as the monument itself containing muslim graves older than 300 years. Both the mosque and the cemetery are found on the list of Historical Monuments of Romania.