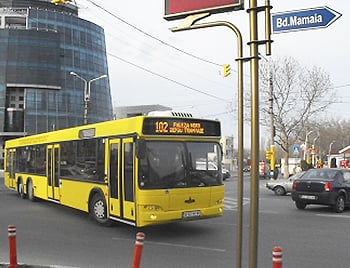 If you don’t have a car in Constanta you don;t have to worry! The public transportation service iside the city is very well organized. The Contanta Railway station is the route end for most public transportation but also a transit point for transportation that are comming from other areas of the city. The city’s districts, Mamaia resort and other towns are connected thorugh the buses and minibuses network which constantly pass by all city’s areas.

The Independent Transportation Office of Constanta is the main public transportation company of the city. The R.A.T.C. buses cover 22 routes of a total lenght of 270 km.

If you need to get to Mamaia by bus, then you must know that 5 R.A.T.C. routes are available to reach this destination.

ROUTE "CONSTANTA CITY TOUR"
No way you can miss the double-decker buses which crosses Constanta and called CONSTANTA CITY TOUR! The same as the buses from the biggest european cities, the starting place is by the Constanta Railway station and travels to the northern area of Mamaia resort, Barrels area (Caraiman Hotel). The City Tour buses provide in their way important touristic sights of the city as:the Folk Art Museum, the History and Archaeology Museum, Ion Jalea Museum, the Roman Edifice with Mosaic, the Carol I Mosque, the Casino, the Aquarium, the Genoese Lighthouse, Tomis Touristic Harbor, the Holiday Village, Aqua Magic Park, the Casino of Mamamia
The special routes Constanta City Tour travel only in season, between 9.30 – 20.00, with a frequency of 30 de minutes,both on week days and on weekend.

ROUTE 40
The bus No. 40 leaves from Constanta Railway station and travels to the Fishery area, few steps from the southern entrace to Mamaia resort. The route has a lenght of aprocimately 13 km and lasts 50 minutes. On the way you will see the folloing touristic sights: Fantasio Theatre, Ancient Map of Dobrogea, the Art Museum, The Dolphinarium, the Planetarium and the Micro reserve, Lake View Entertainment Center.

ROUTE 100
The bus No.100’s route starts from the Railway station and ends at the entrance in the Holiday Village, on Oxford Hotel side. The distance between these two points lasts aproximatelu 40 minutes. A bus station is available right in fromy on the largest Commercial centers of the city, the City Mann, an ideal shopping and entertainment location. Near the commercial center, Tabacariei Park is located, a place full of greenery which streches up to the Holiday Village entrace.

ROUTE 100E
The bus No. 100E travels only in the season. The bus travels by the following route: Constanta Railway station – the Holiday Village – Caraiman Hotel (northern entrace of the resort).The main touristic sights on the way are: the City Mall commercial center, Tabacariei Park, the Holiday Village, the Telegondola, the Aqua Magic Park, the Casino and the docking station from which you cant sail to Ovid Isle.

One way ticket costs 1.75 Lei, and for 2 trips you’ll pay 3.5 lei. These prices are available only for inside the city travels, except Mamaia resort and other outside towns.

Regarding the Constanta City Tour outes, the price for a trip is of 4 lei per peson, and tickets are availabel only on the bus.